Having built a pair of working prototype rocker bogie wheel assemblies, I turned my attention to the main body of the rover. Initially I just used a simple box shape, keeping the front of the chassis well back from the front steerable wheels to avoid collisions. The rear of the chassis had to overlap the area where the rear steerable wheels servo links came under the body in order to fit the top pivot for the linking bar assembly. But I now had a basic chassis design which enabled me to complete my CAD model and see a working mechanical model of the full rocker bogie suspension.

A rendered animation of the rocker bogie suspension

To avoid the rear wheel steering links colliding with the underside of the body, I modified the box so that the bottom was shorter than the total length of the body. This gave the servo steering links more clearance where they passed under the body. I made the front section of the body just long enough to fit in the Raspberry Pi 3 plus two additional support pillars to provide a second pair of holes for the main pivot bolts to pass through. This gave a more rigid main pivot axis assembly than if the bolts just passed through one piece of 3mm sheet material on each side. 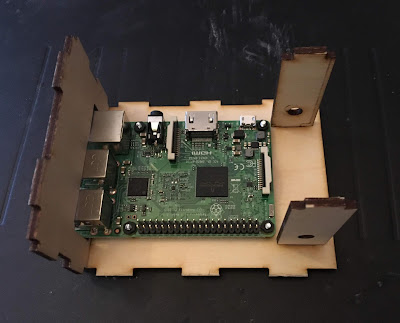 I mounted the Raspberry Pi 3 board in the box, with the USB and Ethernet ports poking through a cut out. This was technically the first Raspberry Pi case I had ever designed. The rear of the box still needed to extend far enough back to support the linking bar assembly on the top. To allow this, the base of the box stepped up to a lesser depth at the rear. 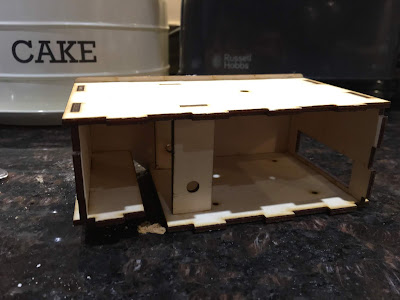 At this stage I was still pondering over how to build the linking bar assembly. I had modelled a bracket to hold the horizontal linking bar, which I was going to have to 3D print. I also needed to solve how to attach fittings to the ends of the cylindrical bar to link to the rocker arms. At about this time, somebody posted a picture of the NASA Mars Curiosity rover in a lab in reply to one of my progress posts on Twitter. 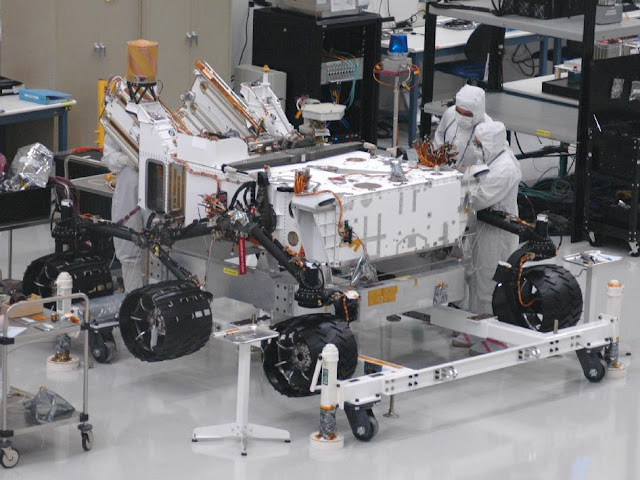 Up to this point I had not realised how large the real Mars Curiosity rover was! But I also noticed the linking bar was a flat bar, not a metal rod as I had modelled based on the JPL educational scale model project which inspired me to design a Pi Wars sized version of my own. That looked a lot easier to build. The picture also gave me another revelation. I did not need to mount the bar on the back of my rover. It could go in front of the main pivot axis of the body. This gave me more room as the body already extended further out in that direction to accommodate the Raspberry Pi. It also better distributed the weight of the body between the horizontal pivot axis and the top mounting point for the linking bar.

I now had a complete design worth building a prototype of. I laser cut it all from 3mm plywood because this was cheaper than plastic, easier to modify with small tools after cutting the pieces and I could re-purpose all the off-cuts and waste pieces as kindling to light the fire at home. 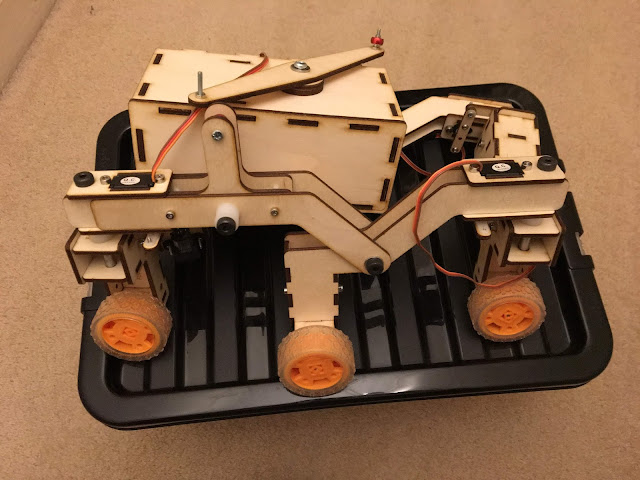 This first mechanical prototype enabled me to verify that the design worked in practice. It also allowed me to test how much motion was possible in the rocker bogie arms before the rear steering legs collided with the underside of the chassis. I was not sure there was enough range of movement, and it also made me realise the weight was not well balanced around the main pivot axis of the chassis. I needed to think about how to solve these problems, and also work out how to fit all the electronics and a power source into the body.
Posted by Footleg at 13:02