CAD to Laser Cutter and Kerf

The same week I learned I had got into Pi Wars 2019 I also managed to grab a place on a training session for the laser cutters at MakeSpace. These were the machines I had primarily wanted to use to make my robot when I joined MakeSpace and now I had done the induction I just needed to work out how to convert my CAD model into a file format I could use on the laser cutter. Or so I thought.

The first problem was how to turn a 3D model of a part into a 2D outline for cutting. I was using SolidWorks CAD software and this has a drawings feature where you can generate 2D engineering drawings for different views of the parts and assemblies you have modelled. These drawings automatically update based on any changes you make to the modelled parts, which is very handy. But the file format for SolidWorks drawings is not supported by the software which the laser cutter uses. So the drawings had to be saved in a intermediate format which can be imported into the laser cutter software. Initially I was doing this directly as DXF format. A simple 'Save As' from SolidWorks to create a file I could import into a laser cutter project.

I cut the parts of one of the forward arms of my rocker bogie suspension which needed to hold a servo, and the parts assembled around the servo perfectly. It was all going very well. 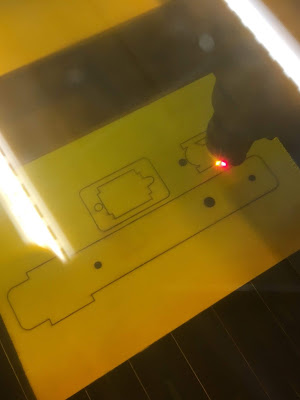 Cutting my first parts on the laser cutter 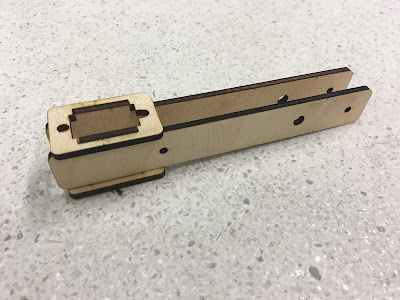 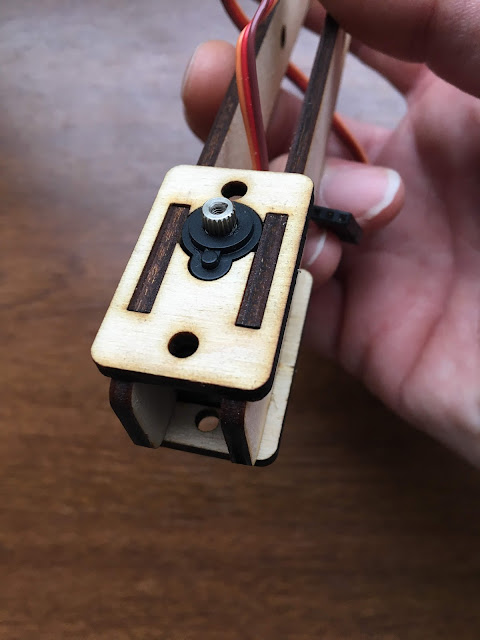 The servo fitting snugly in the mount

Next I cut the parts for a steering leg, and while they went together without any difficulty, there was a lot of play in the plate holding the motor. I started to think about the tolerance of the parts I was cutting and I soon had a lot of questions which I needed to learn the answers to. I had modelled my parts in CAD software to the exact dimensions I wanted them. But clearly when you cut them out with any sort of tool some material is removed by the cutter (in my case vapourised by a laser, but the same applies to a saw where some material is removed by the blade). Thanks to the maker community on Twitter I learned that the width of the cut produced by a tool is called the 'kerf'. Once I knew that I was able to search online and learn about offsetting (adjusting for the kerf). If I modelled a part to be 30mm wide then the drawing output from my CAD program defined a part which was 30mm wide. But when I cut this on the laser cutter the resulting part was only around 29.8mm wide due to the kerf. This was not so significant for how the part looked, but my tab and slot fittings were just a little loose fitting due to this.

There appeared to be 3 approaches people suggested:

I also realised that I needed to consider the sizes of holes for my various bolts and screws. I had used a 3mm hole size for an M3 bolt in the CAD software. But if I wanted a freely rotating M3 bolt without excessive wobble then 3mm was not quite right. The hole needs to be slightly larger than 3mm, but the kerf will mean a 3mm circle will be cut slightly larger. So what size circle does the laser cutter need to be given to get a hole just the right amount larger than 3mm for the bolt to fit freely but not too loosely? I also discovered that the offset features in some CAD software were not present in SolidWorks. I think this may be because while a hobbyist might be happy to apply offsets to their drawings where they are cutting parts themselves, a professional using a 3rd party to do their cutting does not know the kerf settings of the cutter to be used, so they leave it to the cutter operator to apply.

So for me there was no option 1. At the time I did not know whether option 3 was possible in the software on the MakeSpace laser cutters either. So I went for option 2, applying my offsets in a 2D drawing program. Various articles online pointed to using an offset feature in Adobe Illustrator. But I did not want to buy an expensive 2D drawing program when free alternatives were available. My go-to free 2D drawing program is Inkscape. This has a feature on the Path menu to Outset or Inset a shape. But this appears to apply a hard coded offset amount and distorted the shape of my parts adding curves to angled corners. 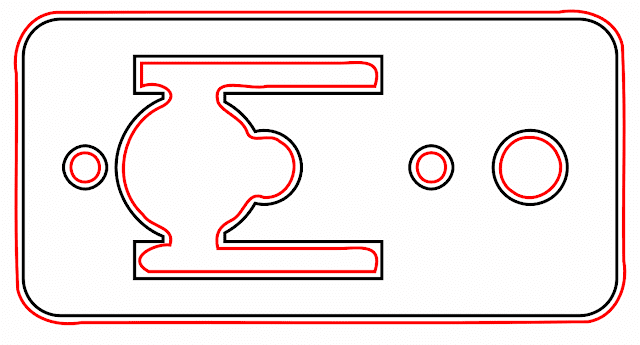 A part with lines outset/inset using Inkscape
(original outline in black, outset/inset lines shown in red)
(the largest circle on the right side is 6mm diameter)

Inkscape also has a feature called Dynamic Offsets where if you select just a single outline and then choose the Dynamic Offset option on the path menu (or Ctrl+J) then you get a drag handle and can adjust the line offset by hand. By duplicating each line I could manually offset it by approximately the line width (setting the line widths to the amount I wanted to offset them. There was still a little distortion of the shapes, but these were insignificant for the amount of offset I needed. 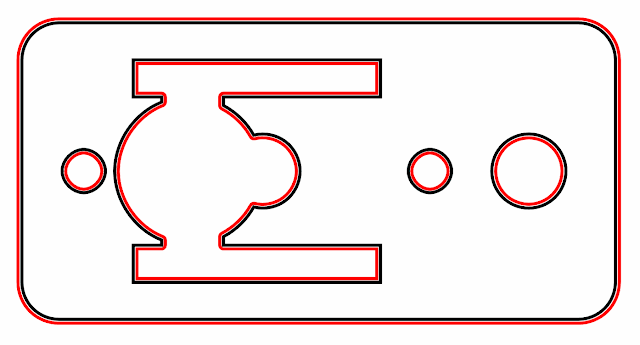 A part with dynamic offsets applied by hand in Inkscape
(original outline in black, offset lines shown in red)

This enabled me to explore different amounts of offset and cut some parts to see what amount of adjustment gave me the right fit. But having to adjust every shape by hand dynamically was time consuming. It also made me realise that I needed different offset settings for different aspects of my parts. My 6mm shoulder bolts used in various pivots between parts needed a different amount of adjustment of the hole size than the machine screws holding parts in fixed positions, which was different to the slots cut to take tabs on the edges of other parts.

I think perhaps option 3 (specify offsets in the laser cutter software) is preferable in the long run, but would require me to adjust all my hole sizes to include some aspect of hole size adjustment. (If I want a 6mm shoulder bolt to rotate freely then I want a slightly larger hole size than 6mm. I should model that hole size in CAD so that when I apply an offset for kerf in the laser cutting software the resulting hole is cut to exactly the size I modelled in the CAD software). At this point I asked a friend at work how SolidWorks recommend doing this, and he pointed me to the free version of DraftSight, as 2D drawing program from Dassault Systemes (who also own SolidWorks). Draftsight features an offset feature which allows you to specify the offset amount numerically. So I developed a workflow to manually apply offsets of different amounts to my various drawing parts using DraftSight.

I discovered that importing DXF files into DraftSight resulted in curves being converted into short sections of straight lines. So my nice rounded edges became jagged. This was avoided by exporting the drawings from SolidWorks as DWG format files. These can be read by DraftSight without converting the curves. I then had to weld all the line segments back together into single outlines for each part in DraftSight. Then I could apply a single offset to the entire outline of each shape (rather than to each line segment individually). Finally I exported the drawing in DXF format to take the file into Inkscape.

At this stage all my shapes have two lines for each feature of a part. The actual CAD drawing outline and the offset outline I want the laser to cut along. In Inkscape I coloured these cutting lines red, leaving the original lines black. That way I could easily verify which offset I have applied and that it is on the correct side (outside for the outlines of parts, and inside for cut-outs/holes in the part). The final step was to save the coloured drawing with offset lines in DXF format and import this into the laser cutter software, telling it to not cut the black lines, and applying cutting settings to the red lines. I was also able to add text to engrave into the material in Inkscape in a 3rd colour if needed and apply settings in the laser cutting software to engrave the shapes outlined by lines in that colour.

At last I was able to cut out parts on the laser cutter which were exactly what I had designed in my CAD model, and start to build my robot. 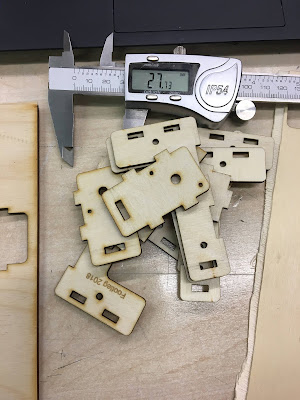 A set of parts for a steering leg 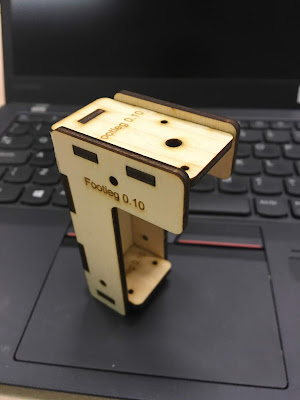