When the Pi Wars robotics competition announced the 2019 event with a space theme, it was clear that the various NASA mars rovers would be a source of inspiration for many potential competitors. I saw a few mentions of Rocker Bogie suspension on Twitter in connection with the competition. I had not heard this term before so I looked it up online. Wikipedia had an article with an animated graphic which had a caption saying it was not actually correct. I was intrigued, but still not sure what it was. I had my balance bot idea and felt that submitting an entry which was just saying I would build a mars rover inspired robot probably wouldn't make the cut for Pi Wars 2019. So I dismissed the idea at the time.

What changed my mind was the publication by JPL of an open source educational model of the Mars Curiosity rover with full build instructions. Their website has a nice animation of their model rover which shows how the rocker bogie suspension really works using a differential pivot (link above: click on the rover to switch to the engineering model and then click the hotspots on the model). It looked like a really interesting build, and felt more likely to succeed in the Pi Wars competition than my balance bot idea. So I based my application on the idea of shrinking the design down to fit within the Pi Wars competition limit stated in the rules.

In the month leading up to the submission deadline, I had started to learn CAD software for the first time. By the entry deadline I had modelled a steering leg from parts which could be cut from 3mm acrylic sheet. 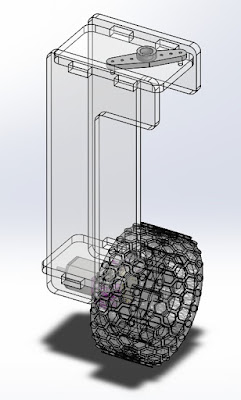 My plan is to design and build a 6 wheel drive rover with full rocker-bogie suspension. The design should be able to turn on the spot, and drive over uneven terrain while keeping all 6 motor driven wheels in contact with the terrain.

I have seen that the most common good performing design for a Pi Wars robot is a standard 4 wheel drive rectangular chassis, but I saw so many of them at the event last year I felt there should be more variety. So I was looking for ideas for something that would be more visually and mechanically interesting. After several months of trying to build a 2 wheeled balancing robot, I have learned a great deal, but also realised this is probably too big a step for my first entry attempt. I’ll never have the time to learn all the computer vision and autonomous driving code if I stick with that plan. So I decided to embrace the Space Exploration theme. After discovering the JPL Mars Rover open source design I am working on designing a scaled down A4 footprint version which I plan to build from acrylic, using the micrometal gear motors and moon buggy wheels as used on the Coretec Robotics Tiny 4WD robots. My aim is to build something visually exciting and mechanically interesting using affordable components. Other components I have bought (but not learned how to use yet!) include a PixyCam2, and a brushless motor and ESC with a view to build a Nerf dart firing mechanism.


To my delight I got a place in the 2019 competition. Now I had a lot of learning to do. I joined Cambridge Makespace in order to learn how to use a laser cutter and start working on turning this idea into reality.
Posted by Footleg at 06:11